September 19, 2015
The extra latency and computational costs of the full TLS handshake impose a serious performance penalty on all applications that require secure communication. To help mitigate some of the costs, TLS provides an ability to resume or share the same negotiated secret key data between multiple connections.

The first Session Identifiers (RFC 5246) resumption mechanism was introduced in SSL 2.0, which allowed the server to create and send a 32-byte session identifier as part of its "ServerHello" message during the full TLS negotiation which we discuss in TLS Handshake.
Internally, the server could then maintain a cache of session IDs and the negotiated session parameters for each peer. In turn, the client could then also store the session ID information and include the ID in the "ClientHello" message for a subsequent session, which serves as an indication to the server that the client still remembers the negotiated cipher suite and keys from previous handshake and is able to reuse them. Assuming both the client and the server are able to find the shared session ID parameters in their respective caches, then an abbreviated handshake can take place. Otherwise, a full new session negotiation is required, which will generate a new session ID. 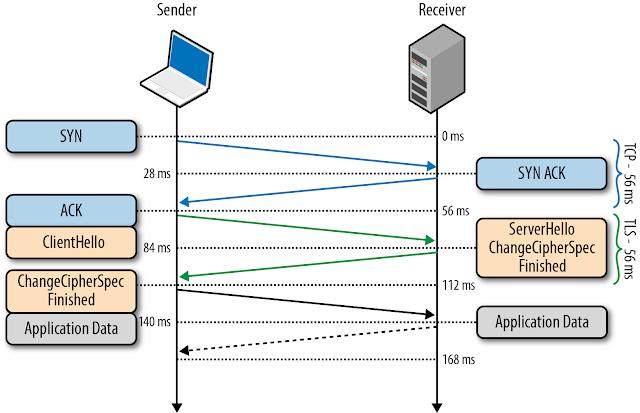 Leveraging session identifiers allows us to remove a full roundtrip, as well as the overhead of public key cryptography, which is used to negotiate the shared secret key. This allows a secure connection to be established quickly and with no loss of security, since we are reusing the previously negotiated session data.

However, one of the practical limitations of the Session Identifiers mechanism is the requirement for the server to create and maintain a session cache for every client. This results in several problems on the server, which may see tens of thousands or even millions of unique connections every day: consumed memory for every open TLS connection, a requirement for session ID cache and eviction policies, and nontrivial deployment challenges for popular sites with many servers, which should, ideally, use a shared TLS session cache for best performance.

To address this concern for server-side deployment of TLS session caches, the "Session Ticket" (RFC 5077) replacement mechanism was introduced, which removes the requirement for the server to keep per-client session state. Instead, if the client indicated that it supports Session Tickets, in the last exchange of the full TLS handshake, the server can include a New Session Ticket record, which includes all of the session data encrypted with a secret key known only by the server.
This session ticket is then stored by the client and can be included in the SessionTicket extension within theClientHello message of a subsequent session. Thus, all session data is stored only on the client, but the ticket is still safe because it is encrypted with a key known only by the server.
The session identifiers and session ticket mechanisms are respectively commonly referred to as session cachingand stateless resumption mechanisms. The main improvement of stateless resumption is the removal of the server-side session cache, which simplifies deployment by requiring that the client provide the session ticket on every new connection to the server—that is, until the ticket has expired.

Popular posts from this blog

July 25, 2021
With the evolution of IoT (Internet of Things), devices that connect wirelessly have increased many folds. From webcams, Smartwatches, fitness bands, firestick, Alexa, Google Home, and many more.., everything is going wireless for connectivity and so does the security threat. The main concern with IoT devices is the unavailability of the full wireless protocol stack (and in the majority of devices, support of 802.1x is not available). So, previously we only have the WPA-PSK option for connecting the IoT devices.  In WPA*-PSK (WPA or WPA2) WLAN, a Pre-Shared Key (PSK) is configured and distributed to all the clients that connect to the WLAN. This leads to PSK leakage, and it can be accessible to unauthorized users (due to the nature of common PSK across all the devices).  Therefore, there was a need to provision unique PSK or Multiple PSK per SSID. Identity-PSKs are unique pre-shared keys created for clients/groups on the same WLAN. Features of iPSK:-   1.Unique PSK for individual Cli
Read more

September 30, 2015
Here we will discuss the flaw in the ServerKeyExchange messages of the TLS protocol which caused the Logjam attack over TLS while using Diffie-Hellman Key Exchange. Before SSLv3, we don't use to authenticate the ServerKeyExchange messages where server negotiates with client regarding usage of cipersuite and parameters. From onwards SSLv3, TLS send the signed message where it mention about parameters it will use but remain silent over ciphersuite. Or in other words, signed portion contains parameters but not contain information about ciphersuite the server will going to use. Now just to remind you, the difference between DH and DH-EXPORT is the size of parameters only. So how to use this flaw - If the server supports DH-EXPORT, an attacker (Men-in-the-Middle) can edit the negotiation sent by the client (even if client doesn't support DH-EXPORT), and replace the list of client supported ciphersuite with DH-EXPORT only. The server will in turn send back a
Read more